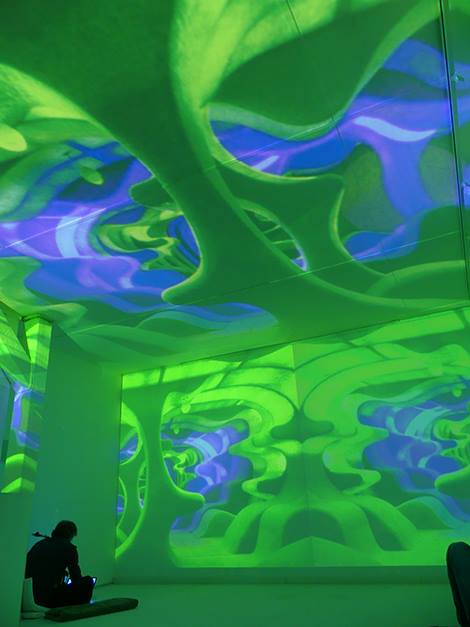 The Dream is a sound and light environment permanently settled in Spazioersetti, a art gallery and laboratory founded in Udine in 2011 by Antonio Della Marina and Alessandra Zucchi who are also the curators of the festival. In a completely white and specially furnished room, the audience relaxed or laid on soft chairs is invited to a psychedelic journey where the colored geometries of light combined with the vibrations of the sound affect the perception creating the illusion of infinite places and dimensions in which to get lost. A work that like a kaleidoscope invites to abolish the time in favor of an ecstatic and contemplative fruition. The show does not have a beginning or an end, as in a sauna you can stop for the desired time. Declaringly inspired by The Dream House of the father of minimalism La Monte Young and Marian Zazeela but enriched by the suggestions of authors such as James Turrell, Dan Flavin, Verner Panton and other visionary artists, The Dream is a moment for themselves, a place to live the experience of a journey into sound in a total environment.

Antonio Della Marina is an Italian electronic composer and sound artist who has focused on working with sinusoids since nearly two decades. Clearly influenced by the minimalist avant-garde of the American east coast in the sixties and seventies, his work exploits the physical properties of sounds and the use of microtonal tuning systems. He uses mathematical abstractions and custom built sound generators to shape his compositions which are offered in the form of sonorous sound sculptures.

Alessandra Zucchi is an architect and media artist whose work mainly focuses on the relation between architectonic space and sensorial perception. She experiments with unusual materials and interweaving light, sound and spatial forms in unexpected combinations. Her videos are gentle and subtle moving light designs, illusionistic superimpositions of geometrical details composed to re-create the ambience and abolish time in favour to a contemplative mood.

Partners in life and art, Della Marina and Zucchi use the language of sound and architecture in order to create scenic environments in which the audience is immersed. They have exhibited their works in galleries and festivals including the Angelica Festival in Bologna, Neue Musik in Wien, the Prague Quadriennale, Logos Foundation in Ghent, Pixxelpoint in Nova Gorica, Lydgalleriet in Bergen and in the legendary loft of Phill Niblock in New York.